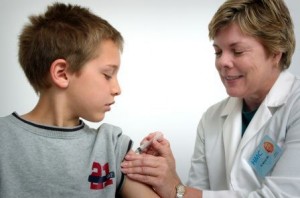 Whooping cough, also known as pertussis, has been increasing in Arizona and the rest of the nation for the last few years. Pertussis usually runs in a cycle, peaking every 3-5 years and then decreasing again.  Symptoms include fits of cough, vomiting after the fits of cough, and a whooping sound during cough. Some complications include pneumonia, convulsions, rib fractures- even death.

Arizona has had a 300-400% increase in pertussis cases in the last couple of years. Many of the cases are part of an ongoing outbreak in the Colorado City area which has been going on for the last year and a half.  In fact, there are more than 500 cases up there.  Most of the cases are in children- and a majority are either unvaccinated or not up-to-date on their pertussis vaccine. The good news is that the antibiotics offered to contacts of confirmed cases can slow the spread of the outbreak if they’re taken in a timely manner.

This outbreak is unnecessary because whooping cough is a vaccine preventable disease.  Young kids should get the DTaP vaccine at 2, 4, 6, and 15-18 months of age as well as another one between 4-6 years. The Tdap vaccine is recommended as a booster for those 11-12 years old, for people  who will be around infants, and for women during each pregnancy.