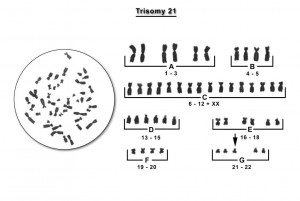 Most people have 46 chromosomes in 23 pairs. One set from the mom and one from the dad.  Sometimes something doesn’t go quite right, and one of the chromosome pairs doesn’t divide evenly at the right time, and a person ends up with 3 of one of the chromosomes.  Trisomy means three chromosomes instead of the normal 2.  There are actually several kinds of trisomy but the most common is Trisomy 21…  better known as Down Syndrome.

Last week Nature magazine published a study from the University of Massachusetts Medical School where scientists have been able to ‘silence’ the third chromosome 21 in a test tube.  They actually added a gene, called XIST to turn off the 3rd chromosome 21.   We don’t really know what all that might mean long term- but if the research pans out it could provide medical interventions in the future.  Not right now, of course, but it does look like it will help scientists better understand chromosomedisorders and maybe someday chromosome therapy.

According to Anthony Carter, PhD, of the National Institutes of Health’s National Institute of General Medical Sciences (who helped to fund the experiment) “Dr. Lawrence has harnessed the power of a natural process to target abnormal gene expression in cells that have an aberrant number of chromosomes. Her work provides a new tool that could yield novel insights into how genes are silenced on a chromosomal scale, and into the pathological processes associated with chromosome disorders such as Down syndrome.”