Stories to Make You Smile

Home/General/Stories to Make You Smile
Previous Next

Stories to Make You Smile 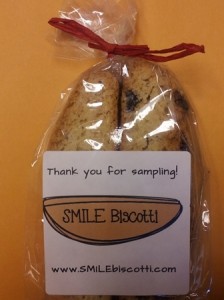 In 2012 the Arizona Developmental Disabilities Planning Council (the DDPC works out of the 4th floor of our 1740 building) partnered with the Southwest Autism Research and Resource Center (SARRC) to develop new self-employment opportunities.  The Home Baked and Confectionary Goods law was used as the foundation for the project due to potential ease of implementation and access to hungry consumers with a love of baked goods.

Working with persons with autism spectrum disorders, the project put together and implemented a training program in baking, production and marketing and leveraged family support to help participants establish small businesses operated out of their home.  At the end of the project, a host of people with autism spectrum disorders completed the rigorous curriculum, got their food handler’s card and developed their product line.

For example, a company called SMILE Biscotti began with the efforts of Matt Resnik who developed biscotti using a traditional family recipe and sold them through friends, family and social media.  In his first months of operation, Matt delivered more than 25,000 biscotti and now maintains a website that includes a video of how his biscotti’s are prepared.

Another successful enterprise is the Stuttering King Bakery, a home-based business operated by Matt Cottle and his mom, Peggy.  The bakery offers an impressive array of delicious items including muffins, scones, brownies, whoopie pies (2 cookies with a filling) and cookies.  Eventually Matt hopes to expand his business enough to move his business to a brick and mortar bakery, where he’ll employ and teach the art of baking to others with autism.