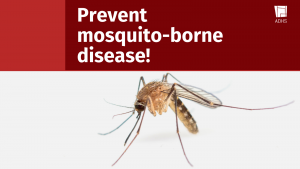 Spring brings with it many beautiful things. Wildflowers. Blooms on saguaro cactus. Warmer weather in mountainous areas that have been cold and snowy during the winter.

Spring and summer also give rise to mosquitoes. That calls for some care when you get out to enjoy the flowers and great weather, and when you tend to your yard.

There is no human vaccine for West Nile virus, and there are no specific treatments. The best way to prevent West Nile virus is to avoid mosquito bites by following these steps:

While anyone can contract West Nile virus and other mosquito-borne diseases, the average age of those with West Nile Virus was 66. In 2021, 985 men and 708 women became ill with the disease.

Most people infected with West Nile virus have no symptoms or only mild illness. Most who have symptoms will experience flu-like illness, including fever, headache, body aches, swollen glands, and muscle weakness. Symptoms usually last for a few days or weeks, but sometimes there can be longer lasting health effects. West Nile virus can also cause more serious conditions including encephalitis (an inflammation of the brain) and meningitis (an inflammation of the linings of the brain and spinal cord).

West Nile virus is a fairly new disease and was first detected in Arizona in 2003, just four years after it was identified in the U.S.

Mosquito surveillance by local vector control agencies and by ADHS involves trapping mosquitoes, counting them, identifying the species, and testing the mosquitoes for viruses. Health officials and vector control professionals put out tens of thousands of traps and identify hundreds of thousands of mosquitoes. Knowing which mosquitoes are active in different parts of the state helps public health officials identify areas at higher risk for mosquito-borne diseases and target control efforts.

About the Author: Carla Berg

Carla Berg is the Deputy Director for Public Health Services at the Arizona Department of Health Services. A native Arizonan, Carla has been a part of the ADHS team since 2008. She began her public health work at ADHS as an epidemiologist within the Tuberculosis Control Program. Since then, she has held roles as Chief Strategy Officer, Bureau Chief for Special Licensing, and Office Chief for Disease Integration & Services. In her current role, she leads the divisions of Public Health Preparedness, Public Health Licensing, and Public Health Prevention Services in addition to health equity and strategic initiatives. She also provides leadership to the Arizona Health Improvement Plan (AzHIP), a multi-sector partnership focused on priorities to improve the health of Arizonans. Carla holds a Bachelor of Arts in Public Health from Johns Hopkins University and a Master of Health Sciences from the Johns Hopkins Bloomberg School of Public Health.