Home/Licensing/Midwifery & the Democratic Process
Previous Next 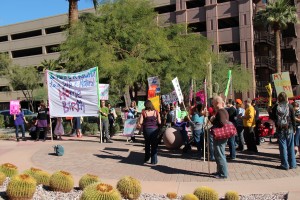 Here’s a short story about using the democratic process to get things done.  Some of you might remember a protest last December in front of our 150 Building.  About 100 folks or so were carrying placards in front of our building asking us to make it easier to have a home-birth in AZ.

Many of you probably didn’t know that ADHS licenses 60 Midwives who practice in Arizona.  Our licensing rules for Midwives were last revised in the mid 1990’s and are out of date; the application is too complicated.  That day last December, Colby Bower and I met with 2 community folks, Allyson Fernstrom and Sarah Macklin, and 2 midwives including Connie Canada, during the demonstration- and we had a productive discussion.  We set up a dialog so we could come up with a solution together.  Allyson and Sarah followed through with flying colors, built an effective coalition, worked with our team (Colby and Rohno Geppert) and the state legislature- and shepherded a bill through the process that will go a long way toward solving some of the issues they were concerned about.

The Governor signed the bill yesterday- providing us with exempt rulemaking authority to overhaul our rules for licensing AZ Midwives and setting up an advisory committee and process to review the official “Scope of Practice” for AZ Midwives.  You can check out the final bill online. We’ll also have some information up on our Midwife website shortly that will highlight where we go from here.

It just goes to show you that the democratic process works…  that ordinary folks, like Allyson and Sarah, can get together, organize, and petition their government and elected officials to get things done.  The key is working within the process, staying involved, and applying the most important skill anybody can have- working well with others (the most important grade any of us get in our academic career).  Well done all.

P.S. There was a study published in the British Medical Journal recently suggesting that there’s little difference in complications among the babies of women with low-risk pregnancies who delivered in hospitals vs. those who gave birth at home with a midwife.  Of course- the article is more complicated than that- so visit the journal website.