Listeria outbreak elsewhere is a reminder guard against foodborne illness

Listeria outbreak elsewhere is a reminder guard against foodborne illness 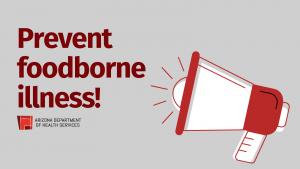 Arizona may not be among six states experiencing an outbreak of disease from listeria bacteria linked to brands of cheese sold nationwide, but the episode provides a reminder about the importance of taking steps to avoid foodborne illness.

So far in 2022, there have been four cases of listeriosis in Arizona unrelated to the current outbreak. About 1,600 people in the U.S. get listeriosis each year, resulting in an average of 260 deaths, the CDC estimates. Americans 65 and older are four times as likely as others to get a listeria infection.

Listeriosis, the infection caused by eating food contaminated with the listeria bacteria, may cause serious and sometimes fatal illness in people 65 and older and those with weakened immune systems. Pregnant women and newborns are also at risk of serious infection.

Even though the American food supply is among the safest in the world, an estimated 128,000 people each year require a hospital stay because of foodborne illness, resulting in about 3,000 deaths.

Here are some simple steps to protect yourself and others from listeria and other causes of foodborne illnesses:

Those most likely to have serious health concerns from foodborne illness, sometimes called food poisoning, are those younger than 5 or older than 65, as well as pregnant women and those with immune systems weakened by disease, chemotherapy, or dialysis.

Most foodborne illnesses happen suddenly and last for a short time. Symptoms may include cramping, nausea, vomiting, or diarrhea.

To learn more about listeria and other causes of foodborne illness, as well as ways to protect yourself, please visit azhealth.gov/FoodborneDiseases.

About the Author: Carla Berg

Carla Berg is the Deputy Director for Public Health Services at the Arizona Department of Health Services. A native Arizonan, Carla has been a part of the ADHS team since 2008. She began her public health work at ADHS as an epidemiologist within the Tuberculosis Control Program. Since then, she has held roles as Chief Strategy Officer, Bureau Chief for Special Licensing, and Office Chief for Disease Integration & Services. In her current role, she leads the divisions of Public Health Preparedness, Public Health Licensing, and Public Health Prevention Services in addition to health equity and strategic initiatives. She also provides leadership to the Arizona Health Improvement Plan (AzHIP), a multi-sector partnership focused on priorities to improve the health of Arizonans. Carla holds a Bachelor of Arts in Public Health from Johns Hopkins University and a Master of Health Sciences from the Johns Hopkins Bloomberg School of Public Health.