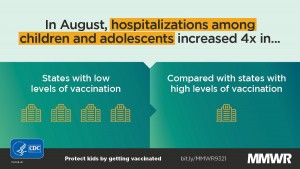 A Centers for Disease Control and Prevention (CDC) report released today offers more evidence that vaccinating as many eligible people as possible against COVID-19 is a critical part of protecting kids from infection and severe illness.

The analysis in the CDC’s Morbidity and Mortality Weekly Report (MMWR) found that emergency department visits and hospital admissions during two weeks in August were higher in states with lower vaccine coverage among their populations. This was at a time when the highly contagious Delta variant was predominant in Arizona and elsewhere and primarily infecting those who aren’t vaccinated.

For the quartile of states that includes Arizona, which was second-lowest quartile for vaccination coverage as of August, the report found that compared to the tier of highest-vaccinated states:

The report also looked at hospital admissions for everyone younger than 18 years. During those two weeks, children and adolescents in Arizona’s tier of states were 3.46 times more likely to wind up hospitalized than those in the highest-vaccinated tier of states.

There’s certainly more study to be done on this topic, and the report notes that other factors for these variations might include adherence to prevention measures, including masking and physical distancing, along with returning to in-person school.

COVID-19 is generally milder among those younger than 18 years than in adults. However, children and adolescents can and do get severe cases that might require hospitalization and treatment in intensive care units.

Another report in today’s CDC Morbidity and Mortality Weekly Report found that COVID-19 hospitalization rates among children and adolescents increased nearly five-fold nationally between late June and mid-August, the same time that the Delta variant became dominant. However, the proportions of children and adolescents hospitalized were similar to those before Delta predominated.

All of this news drives home the importance of getting more eligible Arizonans vaccinated along with following basic mitigation strategies whether you are vaccinated or not:

If you still haven’t been vaccinated against COVID-19, I urge you to do your own research, such as talking with your doctor, and roll up your sleeve at one of the hundreds of vaccine providers around Arizona. Doing so protects not just you but those around you, including children.