When a case of tuberculosis (TB) is suspected, it’s important to rapidly identify it to treat the person and prevent the spread of disease in Arizona. 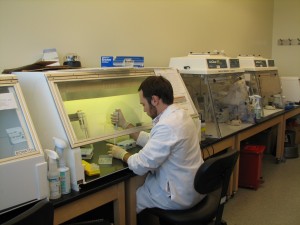 Our State Laboratory is critical in the identification of TB and other bacterial pathogens. The faster these diseases can be detected, the faster public health folks can take action.

The Lab just scored a couple of new instruments that will improve efficiency (cost and turn-around times). One new instrument is called a MALDI-TOF, which is a type of mass spectrometer. The instrument identifies bacteria by separating and categorizing ribosomal proteins. The new test takes less than 30 minutes to run and costs about $1/per test. The new test is accurate too. It’s as accurate as genetic sequencing methods that cost $100 per test. Validation of this test method will begin this summer with implementation of the service to begin in the Fall of 2014.

Once the test method is valid, this new test can replace our current testing for routine bacterial identifications, and identification of TB and non-tubercular Mycobacterium. It will also allow us to conduct TB testing faster and at a lower cost, which is important because the State Lab runs nearly 3000 TB tests a year (about 200 confirmed TB cases are usually identified a year).  The ability to implement new, more efficient laboratory testing methodologies means we can respond more rapidly to infectious diseases to prevent further spread in the community.