An AZ Monsoon Staple: The Scorpion

An AZ Monsoon Staple: The Scorpion 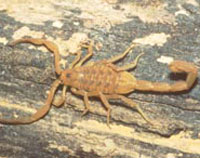 In the Sonoran Desert monsoon = scorpion season.  We have more than 56 species of scorpions- but the bark scorpion is the biggie.  Since you live in the bark scorpion’s territory, you probably have them around or maybe even inside your home.  The Arizona Poison and Drug Information Center and Banner Good Samaritan Poison & Drug Information Center answer thousands of calls every year about scorpion stings- last year they recorded 10,000 scorpion stings in AZ.

Scorpion stings are super painful but usually don’t require special medical treatment. Washing the sting area and using a cool compress along with over the counter pain medication handles the injury. The pain and numbness can last several days.  Sometimes a scorpion sting causes severe symptoms that require fast and expert medical care. Symptoms to look for are difficulty breathing, uncontrolled jerking, drooling and wild eye movements.  Small kids are the highest risk group for severe reactions.  Each year there are about 200 kids in Arizona that need intensive medical treatment.   A recent study by the Banner Good Samaritan Poison and Drug Information Center showed that 33% of scorpion stings happen in the bedroom, 24% in the living room, and 6% in bathroom.

OK… but what should you do in scorpion season? Here are some simple precautions: