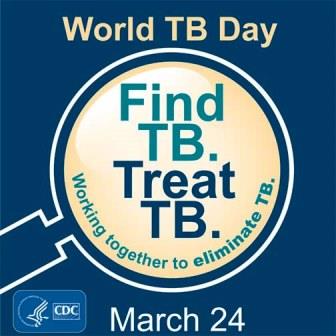 March 24 is World TB Day, which is an opportunity for us to reflect not only on our progress towards tuberculosis (TB) elimination in Arizona, but on the history of what World TB Day stands for globally. World TB Day was established as a reminder that TB is still a public health threat.  TB is an eradicable disease that continues to be the second leading infectious disease killer of adults in the world.

TB programs in Arizona continue to make strides in the global effort to eliminate TB.  In 2014, Arizona saw a slight increase to 193 cases from 184 cases in 2013.  The national picture shows an overall decrease of only 155 TB cases to 9,412 in 2014.  That represents the smallest decline in more than a decade.  However, over the last five years, we’ve seen a downward trend in Arizona and nationally.  There were 283 cases reported in Arizona in 2010.

TB control is a global effort and there is a need for progression of innovative tools to identify new TB cases and new TB latent infections arriving in the U.S.  Provisional 2014 numbers show that nearly 67 percent of the U.S. TB cases were born in another country.  Immigrants and refugees first started to undergo TB screening in the early 1900’s as part of a medical exam to come to the U.S.  Recent updates to these screening guidelines have proven to be a successful intervention and will lead to fewer cases in the near future.  We look forward to announcing continued progress in TB reduction over the next several years.