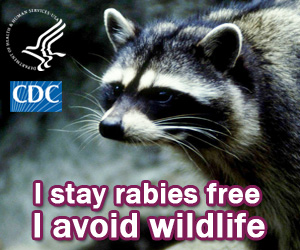 On September 28th, partners around the globe will celebrate the 10th anniversary of World Rabies Day to raise awareness about the impact of rabies and how to prevent the disease. Rabies is a virus that can cause serious damage to the nervous system of humans and animals, and is almost always fatal once symptoms develop. People and animals can be exposed to rabies through direct contact with saliva or contact with neurological tissues of an infected animal. In the United States, human rabies is rare because of effective animal control and vaccination programs. However, around the world, rabies kills more than 59,000 people every year, which is about one death every nine minutes.

So far this year, as of September 14th, there have been 100 rabies-positive animals identified in Arizona; 52 bats, 24 skunks, 17 foxes, and 7 bobcats. Rabies is always cycling in Arizona’s wildlife, but the good news is that it is preventable for people and animals. Animals acting strangely or that appear sick should not be approached. Rabid wildlife can also look normal but will not act afraid of humans. A good rule of thumb is to avoid any unfamiliar animal, wild or domestic.

To protect pets, it is important to keep dogs, cats, and livestock up-to-date on rabies vaccinations. People, especially children, are encouraged to avoid direct contact with wildlife, such as bats. If bitten by wildlife or an animal acting strangely, people should seek immediate medical attention and contact local public health. To go online to learn more about rabies in Arizona and how to protect yourself and your pets.