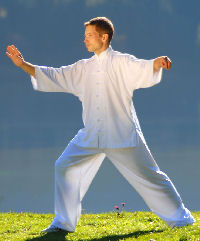 Before I started working here in ’92 I spent a year backpacking in southern Asia with my now wife (then my girlfriend).  Wherever we went in China we’d see seniors in the parks or village squares doing Tai Chi in the morning.  In a village it might be a group of a dozen folks, and in the cities you might seem over 100 people practicing together.  Little did I know that we were observing an evidence-based practice that reduces injuries – a strategy that would one day be part of Arizona’s Health Improvement Plan.

Falls are consistently the leading cause of injury-related deaths, hospitalizations and emergency department visits among Arizona residents 65 and older, at a cost of more than $825M each year in Arizona.  But, how can we prevent falls?  One best practice is Tai Chi – or moving meditation.  Medical studies show the health benefits of Tai Chi.  Worldwide, many people practice Tai Chi as a safe exercise to improve their overall health including:

In a recent study published by the National Council on Aging, comparing Tai Chi: Moving for Better Balance with other evidence-based exercise programs delivered to persons aged 65 and over, Tai Chi showed a net return on investment (ROI) of 509%, which was nearly five times greater than the other programs.

These results show how health care funders and providers can implement effective falls prevention programs that address both the health and cost burdens of unintentional falls.  The results were further bolstered by a recent UCLA study which demonstrated that a “westernized” version of Tai Chi renders significant sleep benefits, improving chronic health conditions and prevent falls among older adults. Tai Chi incorporates a more holistic approach than physical exercise and balance programs, as it addresses issues of the mind, body, and spirit.

As part of our Health Aging Plan www.AzHealthyAging.com, which consists of a three-pronged approach including falls prevention, Alzheimer’s Disease awareness, and chronic disease self-management among older adults, our Bureau of Tobacco & Chronic Disease has received a high level of interest in developing a Tai Chi initiative across the state.  With only a handful of trainers in the state who can teach and certify others to become Tai Chi instructors, our initial effort will begin this Spring by launching a pilot program of training and certifying Tai Chi instructors in partnership with the Western Area Council of Governments – Area Agency on Aging, and our partners in Yuma, La Paz, and Mohave Counties.   Of course – we’ll also be including this best practice in our upcoming Arizona Health Improvement Plan.