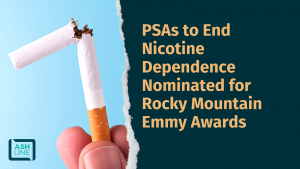 The greatest reward for our Arizona Smokers Helpline (ASHLine) is when someone decides to live their best life free from dependence on nicotine. But it’s always nice to see recognition for the high-quality messaging that helps power this effort.

Three public services announcements produced for ASHLine campaigns were nominated this week for Rocky Mountain Emmy Awards. “The Run” and “Anything for Your Kids,” both produced by True Story Films, are nominated in the Single Spot Commercial category. “Milestones,” which was produced by Matter Films, is nominated as Health/Medical Content.

The PSAs stem from focus group feedback from current and former smokers, who suggested promoting the positives of ending nicotine dependence. These campaigns direct viewers to contact the ASHLine to be connected to a quit coach for cessation counseling and to receive nicotine replacement therapy to support their quit journeys.

In March, “Milestones” won Best in Show from the American Advertising Association Phoenix chapter, while “Anything for Your Kids,” and “The Run” won gold awards.

All of the PSA materials are available for download for free by county health departments and Arizona Health Care Cost Containment System (AHCCCS) medical plans to help connect people with the Arizona Smokers Helpline.

I’m proud of the thought, care, and effort that went into these messages, including that from the ASHLine team and ADHS Communications. Please check out these PSAs below.

Anything for Your Kids