Home/Prevention/Schistosomiasis, a blood fluke
Previous Next 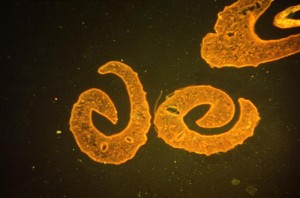 You may remember that at the end of May, Maricopa County Department of Public Health warned us about avoiding swimmer’s itch by not wading along the shorelines of some of our lakes.  Swimmer’s itch or cercarial dermatitis, is a rash caused by a tiny parasitic flatworm of birds that can occur in lakes and ponds throughout Arizona.  Waterfowl are the host for the worms.  The worm lay eggs, the eggs of the worm get into the feces and drop into the water, hatch and then search for a snail to infect.  Once inside the snail, they reproduce and then leave the snail in search of a bird… or an unsuspecting swimmer. This itchy rash is caused by an allergic reaction to the tiny larval stage of the worm burrowing into your skin and then dying.  People can be exposed when swimming or wading in the shallow, marshy parts of the water where the snails are found.  The rash goes away without treatment and symptoms are most commonly treated with topical creams or lotions.

In Africa, the Caribbean, the Middle East and Southeast Asia, a closely related flatworm or “blood fluke” causes schistosomiasis (also known as Bilharzia).  The same cycle between humans, water and snails, except with this blood fluke, the larval stage does not die, but continues to move through the body, and eventually mature into adult male and female worms  in the blood vessels near the intestines or kidneys.  The female produces eggs that are released in the person’s urine or feces.  If these eggs get into a river or lake, with the right snails, they can complete their cycle and eventually infect another person entering the water.  If the eggs don’t make it out of the body, the body’s reaction to these eggs causes the injury and damage characteristic of this disease.  Symptoms usually start one to two months after exposure and include: an itchy rash, bloody urine or diarrhea, stomach pain, or fever and chills.  Unfortunately, continual exposure to infected waters causes repeated infections.  More eggs trapped in the body leads to more symptoms and more severe disease. Untreated infections lead to enlarged liver, abdominal pain, anemia, blood in the urine or feces, trouble passing urine and an increased risk of bladder cancer.

Schistosomiasis affects about 240 million people worldwide and is estimated to be responsible for over 200,000 deaths each year in sub-Sahara Africa.  700 million people live in areas where this disease is found.  The impact of this disease is second only to malaria as the most devastating parasitic disease. Treatment is available to eliminate the flat worm, but cannot undo the damage from the eggs.   Repeated mass treatment, providing potable water, sanitation, education on hygiene and snail control can help control and eventually eliminate this disease.