Home/Preparedness/SARS… A 10-Year Retrospective
Previous Next 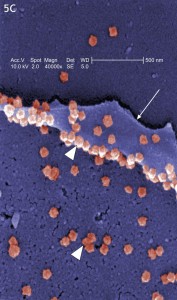 This Spring marks 10 years since Severe Acute Respiratory Syndrome (SARS) arrived on the global public health scene.  It started as a mystery illness in SE Asia- without name, origin, or cure in February of 2003.  The CDC immediately began working with the World Health Organization to investigate the outbreak.  Public health scientists across the globe scrambled to understand and contain this health threat… which ultimately infected more than 8,000 people- killing about 10% of them.

By March of 2003, the CDC had confirmed that the disease wasn’t caused by an influenza virus, but they didn’t know the culprit…  so they named it after the symptoms (Severe Acute Respiratory Syndrome) rather than the causative agent (it turned out to be a new Coronavirus).  March of ’03 also marked the time when the CDC figured out that the virus was spread via face-to-face human contact.  That’s also when the CDC and WHO recommended strict infection control measures including hand washing, gloves, avoiding sharing household items, and limiting interaction between ill patients and others.

Exactly 10 years ago today CDC figured out that there were some “super-spreaders” that were a particular problem with the growing epidemic.  May ’03 also marked the month in which the investigation and public health and clinical interventions matured- bringing the full weight of the global public health and clinical management system to bear on the virus.  Interventions like concise case definitions and reporting standards, laboratory diagnostic tests, travel restrictions, and clear clinical management and infection control guidelines all worked together to eradicate the virus by the Summer of 2003.

The forensic investigation continued for a few months after the virus was eradicated.  The investigation kept pointing toward an animal called a Civet as the source of the new Coronavirus.  A SARS-like virus had been isolated from civets captured in areas of China where the SARS outbreak originated and sold in live animal markets.  It’s a mammal with a catlike body, long legs, a long tail, and a masked face resembling a raccoon or weasel.  By January of ’04 it was pretty clear that a Civet was the probable source, and the CDC issued a  “Notice of Embargo of Civets”, which banned the importation of civets into the US. The ban is currently still in effect.  China also implemented some control measures on them.