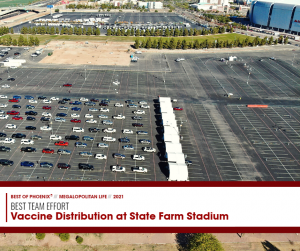 Arizona came together in January 2021, when Governor Doug Ducey and former ADHS Director Dr. Cara Christ worked with the Arizona Cardinals, the Arizona Department of Emergency and Military Affairs, Blue Cross® Blue Shield® of Arizona, Arizona State University, Walgreens, the Department of Public Safety, American Medical Response, and numerous other valued partners. Together, they opened a state-run 24-hour mass-vaccination site in just a matter of days.

It was the first of multiple state-run sites that administered 1.6 million doses of COVID-19 vaccine to nearly 900,000 individuals. These sites dramatically increased Arizona’s ability to get what then was a finite amount of vaccine into the community as quickly as possible. We phased out state-run sites in June as vaccines became readily available at pharmacies, doctors’ offices, pop-up clinics, and other locations.

The State Farm Stadium operation received national attention for its efficiency, including administering a record 12,495 doses in a single day. In February, the site hosted a virtual visit by President Joe Biden and Vice President Kamala Harris, who praised its success.

To me, the best part about the Phoenix New Times mention is the word team. During a global pandemic, thousands of volunteers and professionals worked tirelessly to help others. Every person’s contribution at State Farm Stadium and similar mass-vaccination sites was absolutely critical. I’m proud that ADHS was part of this team.