Now is the time to get vaccinated against influenza

Home/General, Preparedness/Now is the time to get vaccinated against influenza
Previous Next

Now is the time to get vaccinated against influenza 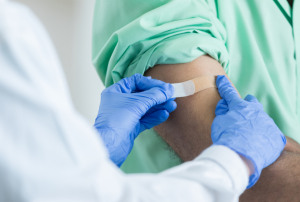 A year ago, the precautions so many Arizonans took against COVID-19 – staying indoors, avoiding large groups, and wearing masks – also helped protect against the flu. There were fewer flu cases in 2020 compared to 2019, according to the Centers for Disease Control and Prevention (CDC).

Many Arizonans have returned to their pre-pandemic routines, and we expect flu cases to increase this year.  With 269 cases of the flu reported in Arizona so far this season, the Arizona Department of Health Services and the CDC strongly encourage everyone six months and older to get a flu shot.

For children younger than age 5, the flu is more dangerous than the common cold, with complications that can include pneumonia, dehydration, difficulty breathing, and in rare cases death. In 2019, the CDC reported a record 199 children died from the flu in the US.

Influenza can affect people of all ages, but can be more severe in children.  ve. Each year an average of 20,000 children in the U.S. under the age of 5 years old are hospitalized due to flu complications. Children who have asthma or other medical conditions such as diabetes or heart disease are also at higher risk of complications.

The best way to prevent the flu, in adults as well as children, is a flu vaccine. In 2019, only 22 percent of eligible children – those at least 6 months old – were vaccinated. Nearly half (44%) of flu-related fatalities were younger than 5.

In Arizona, 42% of cases over the past five years involve children 18 and younger, including 17% of cases younger than age 5.

Although flu vaccines are recommended as early as October, it’s not too late to get a vaccine. Over the past 5 years, the most flu cases have occurred from mid-December through February. More information about the flu, including a map to find a flu vaccine clinic near you, can be found on our Roll Up Your Sleeve webpage.

About the Author: Jessica Rigler

Jessica Rigler, an Arizona native, began her public health career more than 15 years ago, serving in varied roles with local, state, federal, and international public health agencies. Jessica has been with the Arizona Department of Health Services for over 12 years, supporting evaluation activities with the state immunization program, serving as the state’s first Healthcare Associated Infections Coordinator, and leading the Bureau of Epidemiology and Disease Control. She is currently an Assistant Director overseeing the Division of Public Health Preparedness at ADHS, which spans the areas of Epidemiology and Disease Control, Emergency Medical Services, Public Health Statistics, Public Health Emergency Preparedness and the Arizona State Public Health Laboratory. In recent years, Jessica has worked with the ADHS team to lead critical public health responses including opioids and COVID-19. Jessica holds Bachelor’s degrees in biochemistry and human development from the University of California, San Diego, and a Master’s degree in public health from Emory University. She is a Certified Health Education Specialist and certified in infection control.