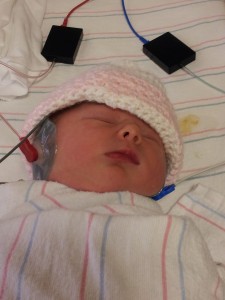 Last December I wrote about an investigation done by a reporter from the Milwaukee Journal Sentinel about newborn screening program turn-around times across the country.  When I saw where Arizona stood relative to the other states in the article, we set a new goal of making sure that our Lab gets 95% of all newborn screening bloodspots from hospitals within 3 days of collection.  Our Lab team immediately responded to the challenge, creating a task force to help the 43 Arizona birth hospitals reach the statewide goal.  For the past 3 months the task force developed an aggressive project plan including educational webinars, hospital site visits, increased courier services and a new webpage.

This week we launched the transit time webpage that features hospital performance reports- providing  soon-to-be parents and the general public with information about progress towards the goal.  The site also recognizes 4 hospitals as top performers for their respective level based on the January 2014 reports- Little Colorado Medical Center, Banner Ironwood Medical Center, Flagstaff Medical Center, and St. Joseph’s Hospital and Medical Center.

Special thanks to Celia Nabor, Sondi Aponte, Isaac Lee, Gannon Wegner, Jesse Lewis, Kirsten Hushagen, Rose Halberg, and Ward Jacox for their continued commitment to the success of the project.