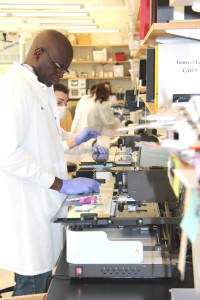 Disease outbreaks can come from anywhere. In Arizona we’ve had illness from contaminated pomegranate seeds from the Middle East, measles from Switzerland, salmonellosis from African dwarf frogs and cholera from Peru. More recently a Canadian traveler died of H5N1 after she returned home from a long trip to China. An exotic disease from another country is only hours away. West Nile virus likely came from Israel on a plane ride to New York in 1999 and now we see it every year here in Arizona.

Right now, world health officials are keeping an eye on dozens of potentially dangerous new pathogens, from H7N9 bird flu in China, to the MERS virus in the Middle East, drug resistant bacteria, H5N1 bird flu in Southeast Asia, to Bas-Congo virus in the Congo. The Bas-Congo virus is a two-headed monster that causes bleeding like Ebola and invading the nerves like rabies.

Effective disease surveillance in other countries helps to protect both their population and the US, since infectious diseases are only a plane ride away. Working with local governments and health officials, CDC recently set up two demonstration projects in Uganda and Vietnam to see if it would be possible to quickly scale up an effective surveillance and response.

We don’t know which disease will come next, but I’m confident the public health surveillance and laboratory system will detect it.