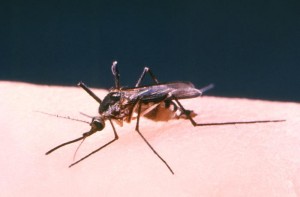 In the summer of 1994 a U of A entomologist was sampling insects in the backyard of his Tucson home when he netted some dark colored mosquitoes with silver bands on their legs. He suspected that they were a tropical breed that shouldn’t be in the Sonoran Desert and sent them to us for identification. His suspicions were confirmed when we identified the mosquitoes as Aedes aegypti or yellow fever mosquito, a notorious transmitter of diseases in tropical areas.  As it turned out, this discovery signaled its return to the state since Ae. aegypti had been present in Pima, Santa Cruz and Yuma Counties during the 1930s and 1940s but had vanished sometime in the 1950s.

After almost 20 years, Ae. aegypti are now firmly re-established in Cochise, Maricopa, Pima, Pinal, Santa Cruz and Yavapai Counties, and occasionally seen in Graham and Yuma Counties. The mosquito’s presence in the state is a potential health concern since it can spread a virus that causes a disease known as dengue (pronounced den’ gee) fever or “breakbone fever”.  In urban areas of the tropics, humans are the reservoir of the virus. About 8-12 days after biting a person with dengue, the mosquito can spread the virus to others through its bite.

Dengue causes a rapid onset of high fever, severe headache, pain behind the eyes and in the muscles and joints, and sometimes a rash. It usually takes from 4 to 7 days after the ‘skeeter’ bite to the start of symptoms.  Almost half of all dengue cases have no symptoms but a mosquito can still acquire the virus when it bites these individuals.  Symptoms tend to be milder in children than in adults.  Unfortunately, there is no vaccine and treatment is supportive treatment.

Over 100 million cases of dengue occur worldwide each year. Although this disease is better known in tropical areas of the world, outbreaks have occurred as close as Hermosillo and in Hawaii, Florida and Texas.  Each year, our county health departments investigate a few cases among travelers to these tropical areas. While no cases of dengue have been acquired in Arizona, our Arizona State Public Health Laboratory recently developed the capability to test for dengue virus. The best way to avoid dengue and other mosquito related diseases, is to use a proper insect repellent and long sleeved shirt and pants.

The best way to prevent dengue from gaining a toe-hold in Arizona is to empty or remove water-filled containers from our yards and home as these provide breeding grounds for Ae. aegypti. This includes items like tires, cans, a pet’s water dish, buckets, bird baths, etc.  The female mosquitoes lay or attach their eggs to the inside surfaces of containers and their eggs hatch the next time the container fills with water. This last couple of weeks of monsoon rains creates a lot of breeding opportunities in backyard containers- so be aware and be active in preventing mosquito breeding in and around your homes.