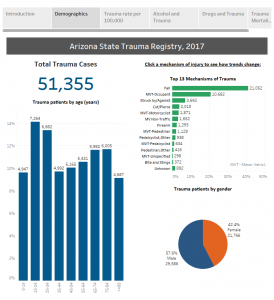 The ADHS Bureau of Emergency Medical Services & Trauma System has launched a new public-facing, trauma data dashboard. This tool allows the public to view an interactive report on trauma and injury in Arizona based on information from Arizona’s 47 trauma centers.

The Arizona State Trauma Registry collects information about patients who are injured, and are treated at a state designated trauma center. The data dashboard contains records from over 51,000 patients and all Arizona counties.

Some interesting points from the data include:

This new tool is an example of how ADHS is working to improve the public’s access to public health data and use data visualization tools to better describe Arizona’s health and inform targeted prevention strategies.