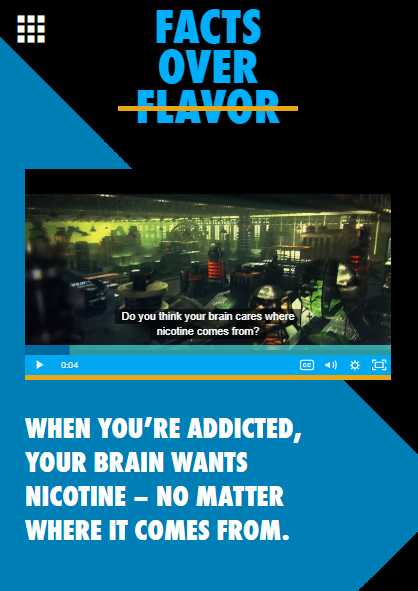 While we’ve made significant strides in reducing cigarette smoking among youth in Arizona, the use of electronic nicotine products, also called e-cigarettes or vape, are on the rise. According to a recent Vital Signs published by the Centers for Disease Control and Prevention, more than one in four high school students and one in 14 middle school students in the United States used a tobacco product in the past 30 days in 2018.

The Arizona Department of Health Services’ Bureau of Tobacco and Chronic Disease recently developed several key initiatives to provide education to Arizona youth about the danger of vape. ADHS launched a public awareness campaign on December 31, 2018 called “Facts Over Flavor” that is geared to Arizona youth between the ages 9 to 13.

The goal of the Facts Over Flavor campaign is to prevent the initiation of vape use among Arizona youth. While vape may be seen as “cool” or “trendy”, the campaign provides the facts behind the friendly-sounding flavors, which is most vape products contain levels of nicotine that are highly addictive and can harm adolescent brain development. The sale of e-cigarettes and vape devices to anyone younger that 18-years-old is prohibited by State law. It can be difficult for consumers to know what other substances are contained within e-cigarette or vape products.

Facts Over Flavor meets kids where they are: on their phones. The campaign engages youth though multiple digital platforms, including Snapchat, Instagram, Pandora, and Facebook. Additional ads are also playing on YouTube and running on television stations such as Nickelodeon and Cartoon Network.

Vape products continue to gain in popularity among youth, even among adolescents as young as nine years old. The CDC reports that e-cigarette use in the United States increased from 11.7 percent to 20.8 percent among high school students and from 3.3 percent to 4.9 percent among middle school students from 2017 to 2018. According to the 2018 Arizona Youth Survey, almost 20 percent of youth across the state reported that they used a vape or e-cigarette product in the past 30 days.

To learn more about vape and e-cigarette use by Arizona kids, how to talk to your kids about vaping, or for more resources, visit our website.