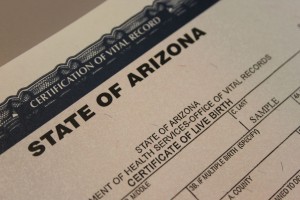 Arizona icon and Senator Barry Goldwater was just 6 months old in July 1909 when the Bureau of Vital Records began keeping track of births and deaths throughout Arizona.

Today, the Arizona Department of Health Services’ bureau is one of just three vital records units to be awarded national accreditation from the Public Health Accreditation Board (PHAB). Established in 2007, PHAB is a nonprofit organization that champions performance improvement, strong infrastructure and innovation

Being just the third state health department to receive this prestigious national accreditation is a reflection of the dedication of the people in our Bureau of Vital Records. We have been maintaining these vital records since 1909, before Arizona was a state, and we will continue to provide this essential service with the professionalism that earned our accreditation.

The bureau maintains and issues certified copies of vital records, including birth, death, fetal death certificates and certificates of birth resulting in stillbirth for events that occurred in Arizona. Certificates can be ordered by mail or online.

Because of COVID-19, the agency no longer provides same-day, walk-in service. The bureau provides the following specialty services by appointment only:

While the bureau officially began keeping track of births and deaths in 1909, it has a sampling of much older records from other sources, including delayed birth records of Arizona citizens dating back to 1855 and death records from as far back as 1877.