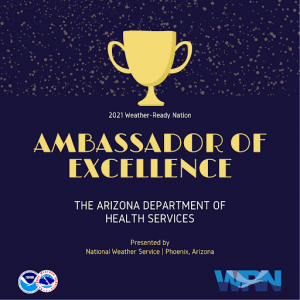 Many issues related to weather can impact your health. Wildfires spawned by lightning can cause respiratory illnesses from smoke and poor air quality. Flash flooding has led to numerous rescues from vehicles and homes. Last year, extreme heat sent at least 2,414 people to Arizona emergency rooms and contributed to 522 deaths.

There are many actions you and your family can take to be prepared for unexpected weather. ADHS has developed simple health safety messages for what to do before, during, and after wildfires, monsoon, extreme heat in the deserts, and extreme cold in Arizona’s higher elevations.

This month, the National Weather Service named ADHS an Ambassador of Excellence for its efforts to ensure that Arizona is weather-ready, including:

“ADHS is a prime example of a core partner promoting weather safety and education as a Weather-Ready Nation Ambassador,” according to the National Weather Service. “Their contributions have undoubtedly improved public awareness, education, and preparedness for the extreme heat experienced in Arizona.”

I’m proud of this recognition and the ADHS employees who worked hard to make it happen. I hope it gives everyone a reason to check out the Weather-Ready Nation resources available at weather.gov so you’re ready for Arizona’s predictably unpredictable weather.