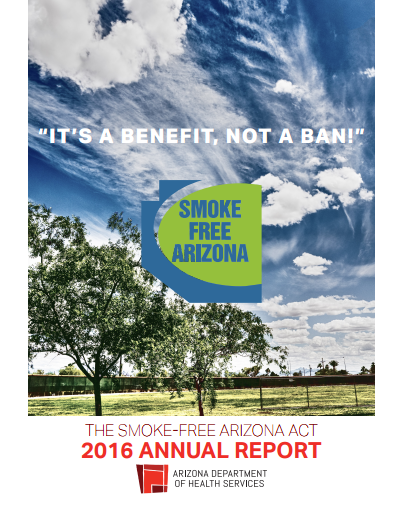 On November 7, 2006, Arizona voters approved Proposition 201, the Smoke-Free Arizona Act. The Act went into effect on May 1, 2007, and prohibited smoking inside and within 20 feet of entrances, open windows, and ventilation systems of most enclosed public places and places of employment in Arizona.

Our Smoke-Free Arizona Program’s continued success is highlighted in the 2016 Smoke-Free Arizona Annual Report. In partnership with county health departments, we conduct consultations and on-site visits at public places and places of employment such as local businesses, bars, and restaurants to provide education and ensure that Arizonans are protected from secondhand smoke exposure.

The Smoke-Free Arizona Act was a major public health accomplishment that has made our state a healthier place to live. Since the Act went into effect, a total of 438,378 educational visits and consultations have been conducted 16,691 complaints have been filed, and 836,835 signs have been distributed statewide.

In September 2015, our Smoke-Free Arizona Program provided an interactive training module to the county health departments, which was intended to bring partners together and cover the more difficult areas of the Act. Attendees were presented a thorough resource guide to present to new employees as well as more seasoned staff that might require periodic refreshers.

The Resource Guide includes items such as the rules, statutes, and how-to guides that were created in house to assist inspectors with such things as enforcement, difficult complaint inspections, outdoor patio determinations, and how to properly document inspections. Forty-four attendees from around the state participated in the training either in person or virtually. Participants also received four hours of continued education credits.