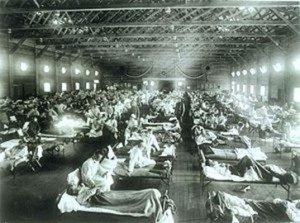 The 1918 influenza pandemic was a devastating global event responsible for up to 100 million deaths. While it is widely known as the “Spanish Flu”, it likely did not originate there. Although most people first learned of the pandemic from Spanish news, some of the earliest documented cases were in the Midwestern U.S. In Arizona at the time, there were only 519 influenza-related deaths reported. Although ASU researchers later identified 2,228 influenza-related deaths through death certificates, they estimate that 6,000 Arizonans died that year.

The 1918 pandemic was a wake up call to the world and gave rise to our modern day public health and healthcare systems. Nearly 100 years later, public health continues to take influenza very seriously. A strain related to the 1918 pandemic virus still circulates today and continues to remind us of the impact influenza has on society. More recent measures to prevent and mitigate an influenza pandemic include a network of laboratories  around the globe that test thousands of influenza specimens (including those from the Arizona State Public Health Laboratory) and genetically characterize them to monitor unusual changes in the virus. This can help with early detection of a pandemic strain so that preventative measures, like vaccine development, can be implemented quicker.

Countries, states, and counties have developed preparedness plans detailing dissemination of stockpiles of antivirals and vaccines, and implementation of non-pharmaceutical interventions such as closing schools. Scientists are also working tirelessly to create a universal influenza vaccine that would give people immunity against all influenza viruses, including potentially a pandemic strain.

To better prepare Arizona for a pandemic, ADHS made positive influenza tests from labs reportable in 2004 and deaths in children reportable by healthcare providers four years later. This allows the ADHS influenza epidemiologist to monitor trends, spread, and impact of influenza throughout our state year-round. You can stay up-to-date on influenza activity in Arizona for the duration of the season by viewing our weekly reports on the ADHS website, and subscribing to receive the influenza report via email.