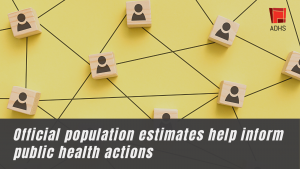 From a public health perspective, it matters that 9,562 people live in Greenlee County, and that 1 in every 5 Arizonans lives in an unincorporated area. It’s important that health leaders know how many people in Yavapai County are 50 or older, and what the ethnic makeup is for Gila County.

That’s why it’s so important that ADHS and the Arizona Office of Economic Opportunity (OEO) have released official population estimates for Arizona. State agencies are required by executive order to use official population estimates from the State Demographer’s Office, which is part of the Arizona Office of Economic Opportunity. ADHS staff working with vital statistics broke these down by age, ethnicity, and other important factors.

Reflecting the population as of July 1, 2020, the data has population statistics by age group, race/ethnicity, gender, county of residence, and whether people live in urban or rural areas. The Arizona Office of Economic Opportunity also has developed population totals for incorporated and unincorporated places.

Why does that matter for your health? Hypothetically, if a particular disease becomes more prevalent in one area of the state compared to others, the data will allow public health to recognize that and investigate to understand why that happened. If health experts know that a medical issue is most common among men in a certain age group living in a particular county, that can help health care leaders focus on the reason and speed the search for a remedy.

Recently, the many reports on our website were updated to include official 2020 population statistics. These include:

I’m grateful to the team members in Vital Statistics who worked long hours on these estimates. In public health and so many other areas, it’s important to speak with data. So their efforts will benefit us all.