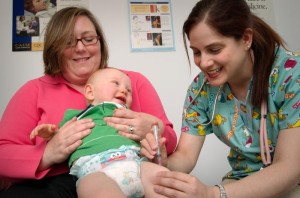 Fifteen years ago The Lancet published a case study that erroneously suggested that there could be a link between the MMR vaccine and autism.  That letter has long since been discredited, and back in 2010 The Lancet retracted the article.  Anti-vaccine advocates have been pointing to that long-since discredited 1998 case study to argue that there is some kind of link between vaccines and autism… even though numerous articles published in the last several years have all concluded that there is no such link.

The Journal of Pediatrics just released another new study that again demonstrates that there’s no association between vaccines and autism development in children.  This new study looked at the number of antigens from vaccines that children receive (antigens are the things in vaccines that help our immune systems make the antibodies needed to fight disease).  This look at antigens was important because different shots have different amounts of antigens in them, so looking at the number of antigens kids received is more thorough than just looking at the total number of shots they got.

This new study concluded that…  “These results indicate that parental concerns that their children are receiving too many vaccines in the first 2 years of life or too many vaccines at a single doctor visit are not supported in terms of an increased risk of autism.”