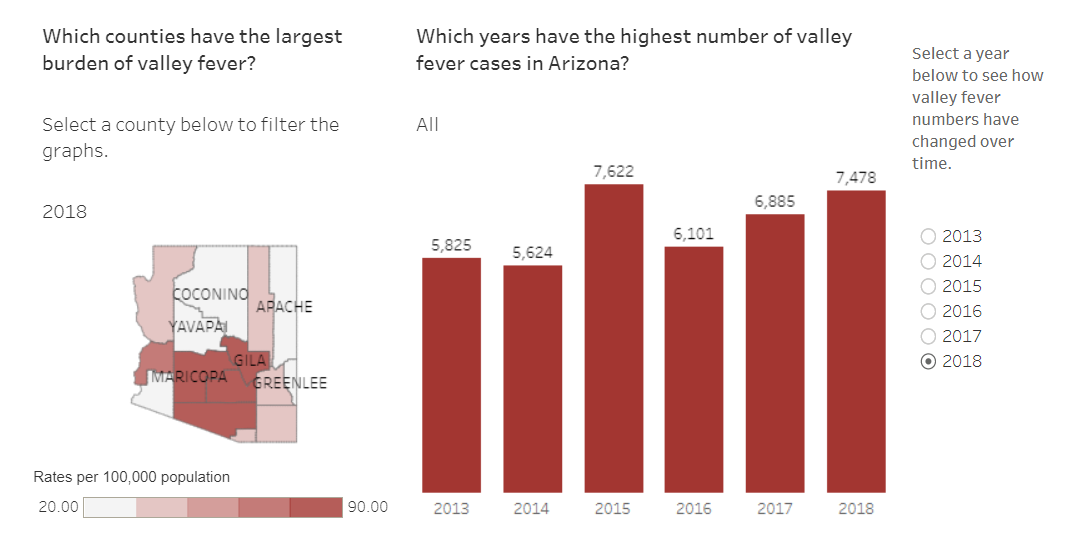 Valley fever is a potentially debilitating and deadly respiratory disease caused by the Coccidioides fungus that affects thousands of Arizonans every year. Valley Fever Awareness Week (Nov. 9–17) was a success with social media messaging, promoting the poster contest, and launching a new data dashboard. Although Valley Fever Awareness Week is over, raising awareness of this local threat to public health is an ongoing effort.

The Coccidioides fungus is found primarily in the Southwest U.S. where Arizona reports half to two-thirds of all cases nationally. The fungus was, however, recently found in Washington state, and according to a new climate study, the area where it resides will more than double in size and cases of Valley fever will increase 50% by the end of the 21st century.

Such projections highlight the importance of tracking and analyzing different Valley fever trends over time. To display data on this disease in a more digestible and interactive way, the Arizona Department of Health Services (ADHS) has published a new Valley fever data dashboard for the public and providers. Additionally, our newly released annual report demonstrates that in 2018, there were 7,478 reported cases, 715 hospitalizations with charges totaling over $53 million, and 45 deaths attributable to Valley fever.

Valley fever is not going away and early diagnosis is a challenge. Know the symptoms of Valley fever (cough, fever, exhaustion) and ask your doctor to test you if you think you may have it to receive appropriate medical care and follow-up.