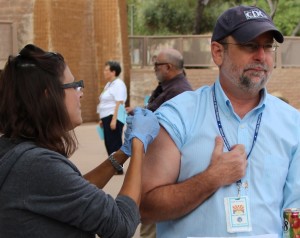 Flu season is here!  Parts of the country (mostly in the south) have had more intense flu activity in the last few weeks, and 25 states reported widespread flu activity for the week ending December 28th.   Meanwhile, in Arizona we are seeing an increase in the number of lab-confirmed flu cases reported to ADHS- but 50% fewer cases than we saw last year at this time.  Not only are we seeing rising numbers of flu, CDC has also received reports of severe respiratory illness among young and middle-aged adults, which we also saw during the H1N1 pandemic.

In Arizona, as in the rest of the U.S., three different strains are circulating including the same virus that caused the 2009 pandemic.  The H1N1 virus is part of this year’s seasonal influenza vaccine.  Don’t forget — it’s not too late to get your flu vaccination if you haven’t already!

Like flu, respiratory syncytial virus (or RSV), is off to a slower start this year compared to last year. We’ve had 182 lab-confirmed cases reported so far (as of December 28th), compared to 601 cases at this same time last year. As we see every year, RSV is more common in kids 4 and younger this year, with 84% of our cases in this age group. Check out the weekly surveillance reports for  Arizona and for the U.S. online.