Foodborne Illness Affects One in Six Across the U.S.

Home/Preparedness/Foodborne Illness Affects One in Six Across the U.S.
Previous Next

Foodborne Illness Affects One in Six Across the U.S. 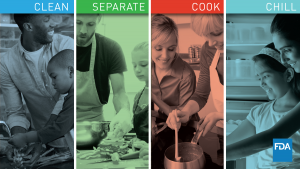 We’ve all had those times when our stomach doesn’t feel just right, often after eating. And often, that stomachache is no more than minor discomfort that lasts just a short time.

Even though the American food supply is among the safest in the world, an estimated 128,000 people each year require a hospital stay because of foodborne illness, resulting in about 3,000 deaths. Overall there are about 48 million cases of food poisoning in the U.S. each year, affecting one in six Americans.

With September designated as Food Safety Education Month, we want to make sure you have the tools to protect yourself and your family from foodborne illness.

People get food poisoning from swallowing food or beverages that have been contaminated with a germ or toxic substance. Contamination can occur anywhere along the food chain, from the field to the table. Potential contaminants include a variety of bacteria, viruses, and parasites.

Most foodborne illnesses happen suddenly and last for a short time. Symptoms may include cramping, nausea, vomiting, or diarrhea. Raw and undercooked meat, poultry and eggs are especially common as sources of foodborne illness. Other common sources are raw shellfish and unpasteurized milk.

What can you do to protect yourself, your family and friends? Following four simple steps can help.

Those most likely to have the most serious health concerns from foodborne illness, sometimes called food poisoning, are those younger than 5 or older than 65, as well as pregnant women and those with weakened immune systems from other diseases, chemotherapy, or dialysis. Those younger than 5 years of age who contract Salmonella are three times more likely to be hospitalized than adults. Among those older than 65,  nearly half of those with a lab-confirmed foodborne illness from Salmonella, Campylobacter, Listeria or E. coli are hospitalized.

ADHS has a Foodborne Illness Surveillance Team that routinely monitors infectious diseases spread through food and aims to find and stop foodborne illness outbreaks. In partnership with public health partners throughout Arizona, the team of public health professionals accomplishes these goals by interviewing laboratory-reported cases, investigating outbreaks, and communicating with many partners.

In addition, the team provides educational and other resources, and collaborates with local health departments, state agencies, and federal partners such as the Food and Drug Administration (FDA) and Centers for Disease Control and Prevention (CDC) to promote food safety.

About the Author: Jessica Rigler

Jessica Rigler, an Arizona native, began her public health career more than 15 years ago, serving in varied roles with local, state, federal, and international public health agencies. Jessica has been with the Arizona Department of Health Services for over 12 years, supporting evaluation activities with the state immunization program, serving as the state’s first Healthcare Associated Infections Coordinator, and leading the Bureau of Epidemiology and Disease Control. She is currently an Assistant Director overseeing the Division of Public Health Preparedness at ADHS, which spans the areas of Epidemiology and Disease Control, Emergency Medical Services, Public Health Statistics, Public Health Emergency Preparedness and the Arizona State Public Health Laboratory. In recent years, Jessica has worked with the ADHS team to lead critical public health responses including opioids and COVID-19. Jessica holds Bachelor’s degrees in biochemistry and human development from the University of California, San Diego, and a Master’s degree in public health from Emory University. She is a Certified Health Education Specialist and certified in infection control.