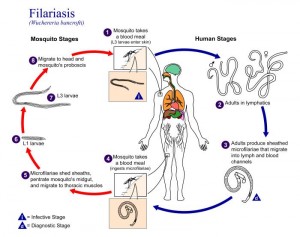 I thought I’d do a series on some interesting tropical diseases over the next few weeks.  Let’s start with a disease called filariasis- which can cause something called elephantiasis.

You’ve probably heard of a disease in dogs called heartworm.  It’s caused by tiny thread-like worms called microfilariae.  Like many diseases, there’s a similar disease that people living in Africa and Asia can get, called lymphatic filariasis.  As the name suggests, the microscopic worms infect the lymph system, damaging the body’s ability to control fluid balance and the immune system.  While most people show no symptoms of infection, a small percent of infected people develop swelling and fluid buildup. When this happens, the skin and tissue are more susceptible to germs and repeated infections.  If not kept clean and properly treated- the skin becomes hardened and thickened and in some cases making a person’s leg elephant-like. This physically and socially debilitating condition is called elephantiasis.

The small worms that cause the disease are transmitted from an infected person by a mosquito bite.  The adult worms mate and release millions of these microfilariae into the blood system.  Coincidentally, the tiny worms tend to circulate in the blood at night, the time when mosquitoes are likely to bite and the best time to examine the blood of an infected person to make the diagnosis.  Once in the mosquito, the microfilariae develop into a larva form in a couple weeks and the mosquito can then infect the next person it bites.

The WHO estimates over 120 million people are currently infected with lymphatic filariasis, with about 40 million disfigured and incapacitated by the disease. A further 1.4 billion people are at risk for this disease. About 65% of those infected live in South-East Asia, 30% in Africa, and the remainder in other tropical areas.   The good news is the United Nations Prequalification of Medicines Programme, managed by the WHO announced the prequalification of a medicine, diethylcarbamazine (DEC), to be used in preventive treatment campaigns, aimed at eliminating this disease.  When taken, this medicine eliminates the microfilariae in the blood so mosquitoes can’t get infected… meaning fewer people will become infected.