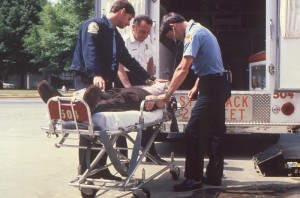 A couple of weeks ago, I introduced the concept of “Over Triage”…  which is when EMS transports a patient to the highest level of care (like a level I trauma center) when they could have taken them to a level III or IV trauma center closer to their home.  The downside of over-triage is that care at high-end centers is expensive. There’s a nice primer on trauma systems if you want to read more.

This week’s focus is on “Under Triage” – when EMS transports a patient to a facility that’s not as qualified to care for their injuries.  There are a number of factors that contribute to under triage: it’s sometimes hard to assess how badly someone is hurt at the scene; emergency workers who don’t have a lot of experience with children may not understand how quickly they can get worse; some adults have high pain thresholds and may make it difficult to see just how badly they’re injured.  The perception of tort liability exposure might even play a role sometimes.

The on scene EMS person needs to consider all these things when deciding which hospital is the best choice for their injured patients…  and it’s a critical decision.  Under triage delays getting the patient the care they need and increases the chance that an injury may be overlooked and under-treated.

Under and over-triage are like a teeter-totter.  Under triage is to the left of the balance point and over triage is to the right.  The sweet spot is the point when you have just enough over triage necessary to guard against under- triage.  So – how do we get to the sweet spot?  I’ll cover that in a couple weeks.  In the meantime, the State Trauma Advisory Board finished a couple of great products this week.  A new five year State Trauma Plan and the 2013 Annual Trauma Report.