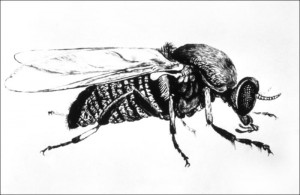 Last year a young child came down with onchocerciasis in northern Arizona.  Onchocerciasis, is caused by a filarial worm similar to dog heartworm and the roundworm that causes elephantiasis.  This child had a dog-related species (Onchocerca lupi) of the roundworm in her neck next to her spinal cord and was the first documented case in the US. A few other cases of this species has been found in dogs and cats in the US and about four other human cases in other parts of the world but where they got the infection and how they were infected is still unknown.

Onchocerciasis, is also the second leading infectious cause of blindness in the world and can cause debilitating and disfiguring skin disease.  The human species of this parasitic worm (Onchocerca volvulus), is spread by the bite of an infected blackfly. It got the name “River Blindness” because the fly that transmits infection breeds in rapidly flowing streams and the resulting infection can cause blindness. Persons with heavy infections will often have a skin rash (usually itchy), eye disease, or nodules under the skin. The World Health Organization’s estimates that at least 25 million people are infected and 123 million people live in areas that put them at risk of infection. About 300,000 people are blind because of the parasite and another 800,000 have visual impairment. Nearly all of the infected persons live in Africa; with about 1% in Yemen and six countries in the Americas.

The infection is transmitted in remote rural areas and, unlike malaria, an infection often requires more than one infectious bite. So the risk of infection is higher in adventure travelers, missionaries, and Peace Corps volunteers and other long-term volunteers who are likely to have repeated exposures to blackfly bites. There is a lower chance of transmission in the Americas, even for those with longer stays.

The disease spreads from person to person by the bite of a blackfly, but the larva must undergo a change in the fly. When a blackfly bites a person who has onchocerciasis, tiny worm-like larva (called microfilaria) in the infected person’s skin enter and infect the blackfly.  After about 2 weeks, the larvae develop into a stage that is infectious to humans and make their way to the mouth of the fly.  Like mosquitoes, female blackflies feed on animal blood to make eggs.   An infectious blackfly will deposit larvae on the skin when biting a person. The larvae then penetrate the skin to infect the person.  The number of worms in a person is related to the number of infectious blackfly bites.

It can take up to one year for the tiny larva (microfilaria) to develop into an adult worm and between 10 and 20 months before larvae can be found in the skin.  A nodule begins to form around the adult worms protecting it from the immune response.  Each adult female worm can live from 10-15 years, and produce thousands of larvae a day and millions of larvae during her lifetime.  It’s the dead and dying larvae that cause most of the symptoms of this disease, and most people feel well until the adults start producing large numbers of larvae.  The damage caused by larvae that die in the eye results in damage of the optic nerve or lesions on the cornea that without treatment, clouds the cornea resulting in blindness.  Blindness usually occurs with a heavier worm burden (an intense infection).