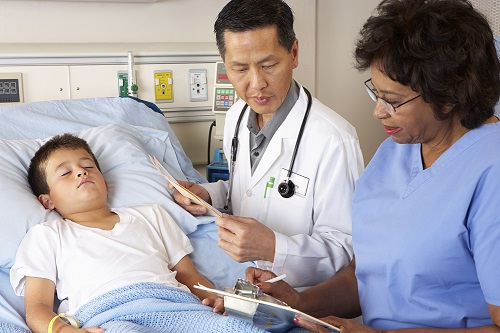 The Centers for Disease Control and Prevention (CDC) published a report this week in the Morbidity and Mortality Weekly Report (MMWR) about five Arizona children diagnosed with Acute Flaccid Myelitis (AFM).  AFM is a rare but serious condition that affects the nervous system causing a sudden onset of arm and/or leg weakness and loss of muscle tone and reflexes. This is very similar to the type of paralysis that older adults may remember being caused by the polio virus.  AFM can affect people of any age, but children are most commonly affected.

CDC first noted an increase of cases of AFM in 2014 followed by another spike in 2016. In September of 2016, an acute care hospital in Maricopa County reported neurologic illness in eleven children over a six-week time span.  Ultimately, five children were classified by the CDC as having AFM.  Despite extensive testing at the hospital laboratory, the Arizona State Public Health laboratory, the CDC and the Translational Genomics Research Institute, the cause of AFM remains unknown.

AFM remains a rare disease, affecting fewer than one in a million people.  Arizona had a total of six cases of AFM in 2016.  The 2016 cases described in the report were detected by astute physicians, who are important partners in identifying cases so that scientists can continue to try and learn more about this disease.  Although the cause is still unknown, it’s always important to practice general disease prevention steps, like washing your hands, staying up-to-date on vaccines, and protecting yourself from mosquito bites.