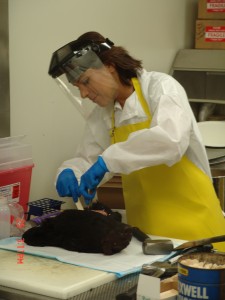 Some of our Laboratory scientists (Kathryn Fitzpatrick, Alexandra Bhatti, Heather Bickley and Charles Martin) are busy right now testing the brains of the 2 bears that were destroyed over the weekend to see if they had rabies.  You might have heard about the bear attacks, which happened in and around Payson recently. On Sunday, a Tempe man was attacked by a bear in his tent in Ponderosa Campground which is about 12 miles E. of Payson on Hwy. 260 (my family camps there every Halloween).  Last Friday a bear attacked a guy sleeping in his cabin under construction near Payson.  Last month a bear attacked a woman also at Ponderosa.

It’s important to know if the bears were infected because if they were, then the people that were attacked definitely need a rabies vaccine and immunoglobulin. If the bears don’t have rabies then the patients don’t need the vaccine.  Rabies is pretty much 100% fatal if an exposed person doesn’t get a vaccine in time.  Also, by testing the DNA from the saliva etc. from the bears and matching it to the residue left after the attacks, we can tell whether Fish & Game got the right bears.  By the way- if you’re my age, you might think that the rabies vaccine and immunoglobulin is a series of shots with real long needles in the stomach.  It is a series of shots- but it’s not in the stomach anymore (but the immunoglobulin is real expensive- about $10K).

By the way- it would be rare for a bear to be infected with rabies because they’re not a common “reservoir” like foxes or bats.  But it can happen- especially if a rabid fox attacked the bear awhile back.