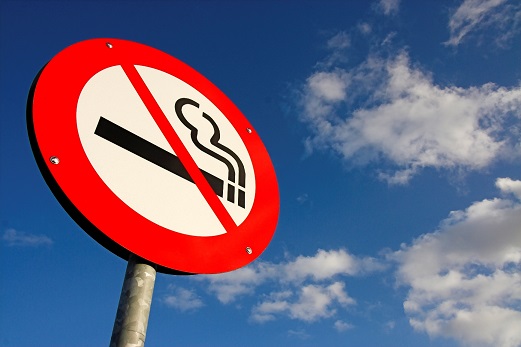 Do you remember walking into your favorite restaurant and being asked, “smoking or non-smoking?” Just a decade ago you could still hear that familiar phrase as smoking in a restaurant or bar was legal. Those smoking sections did little to protect non-smokers from the dangers of secondhand smoke. Voters passed the Smoke-Free Arizona Act in 2006 going into effect on May 1, 2007.  It bans smoking in most enclosed public spaces like bars, restaurants, and workplaces.

The Smoke-Free Arizona Act prohibits smoking inside and within 20 feet of entrances, open windows, and ventilation systems of most enclosed public places and places of employment. Exemptions do exist some of which include private residences, veteran and fraternal clubs, outdoor patios, and retail tobacco shops. We’ve truly seen a paradigm shift among our citizens. At one time smoking was the norm, it was acceptable as was the inconvenience of breathing toxic secondhand smoke.

We rely on the public to submit online complaints when a violation occurs. That number has dropped from 4,800 complaints in 2007 to 1,500 in 2016. Local county health departments work with ADHS to ensure all complaints are addressed within 15 days. Most are minor violations such as employees or customers smoking too closely to a door.

As the adult smoking rate has dropped from 19.1 percent to 14 percent in the past five years, fewer people are smoking and those who continue to smoke choose to do so outdoors instead of inside their homes. Many Arizonans have taken advantage of the free Arizona Smokers’ Helpline which provides quit coach support and access to nicotine replacement therapies such as the gum, patch, or medications. You can call the ASHLine at 1-800-55-66-222.

In 2012, the Maricopa Community College system enacted a smoking ban on all campuses with most public and private colleges and universities following shortly. Arizona Smoke-Free Living has worked in partnership with ADHS to address multi-unit housing. Many apartment complexes now advertise their smoke-free policies as an amenity, with some going completely smoke-free. Our youth coalition effort, Students Taking a New Direction, has helped get local municipal parks to implement smoking bans in over a dozen locations.

In 2014, we set our sights on reducing smoking in cars with minors. Our tobacco team’s campaign asking smokers ‘who they’re sharing their secondhand smoke with’ has already taken hold as Kingman and Tempe have already banned smoking with minors in the car. Let’s continue to work together to keep Arizona Smoke-Free!