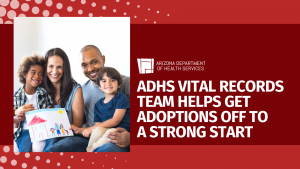 On a beautiful Saturday morning recently, more than 100 Arizona foster children began their new lives when they were adopted by loving families. A team from the ADHS Bureau of Vital Records was there to help.

Maricopa County Superior Court’s National Adoption Day was part of a nationwide event held each year to raise awareness about foster children who are waiting to find their forever families. For the last several years, Maricopa County’s event has been the largest in the country with more children adopted here than in any other city in the U.S. This year, more than 100 children were adopted at the Maricopa County event, helped by 30 current and retired judges who volunteered to perform the adoption hearings.

Volunteers from Vital Records attended the event to support the foster kids and their new families. They shared a packet with information about how to obtain and amend a certified birth certificate, and provided a few small items to help celebrate the special day.

In Arizona, there are about 11,300 kids in the foster care system, ranging from toddlers to teens. Nationwide there are an estimated 115,000 foster children looking for permanent families.

This year’s event was even more special for the Vital Records team and the participants because it was held in person, which was not possible the past two years because of COVID-19.

The Arizona Department of Child Safety website has more information on Arizona adoptions.

About the Author: Tom Salow

Tom Salow is Assistant Director of Licensing and Policy and Intergovernmental Affairs for the Arizona Department of Health Services. He started with ADHS in 2005 as a senior rules analyst, working with a variety of licensing programs to draft, amend, and adopt administrative rules. In 2009, he became the manager for the Office of Administrative Counsel and Rules, helping oversee senior rules analysts, administrative counsel, and policies. He also served as interim legislative liaison for just under a year during this time. After a few years, he moved into the Division of Licensing as Deputy Assistant Director (Branch Chief), overseeing Vital Records, Radiation Control, Child Care Licensing, and Special Licensing. This oversight includes the medical and adult-use marijuana programs, business and finance, and enforcement. He moved into his current role as interim assistant director in January 2022. He continues his duties as Branch Chief but now oversees three additional bureaus: Long-Term Care Licensing, Residential Facilities Licensing, and Medical Facilities Licensing. He also oversees the chief legislative liaison and the manager for the Office of Administrative Counsel and Rules. Tom has a bachelor of science in Justice Studies and a Juris Doctor from Oklahoma City University. He lives in Phoenix with his two teenage boys.