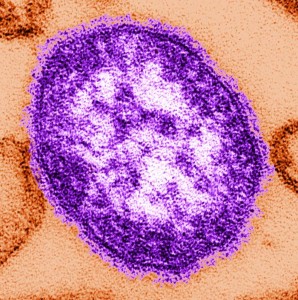 So far, there have been over a hundred cases of measles associated with Disneyland (including seven here in Arizona).  We’re  lucky no “third generation” cases have been found here (yet).  Measles can take up to 21 days to develop in a person who has been exposed to the disease, so we’re not out of the woods quite yet…but if we don’t get any new cases by Valentine’s Day, this outbreak is likely over for Arizona.  Talk about dodging a bullet!  To be extra cautious, public health usually waits 42 days after the last case exposure to officially call the end to the outbreak.

So why didn’t we get more cases?  It’s likely a number of factors can explain it.  We know that about 95% of people in a community need to be vaccinated in order to achieve the herd immunity necessary to prevent an outbreak.  In Kearny, where one of the measles cases exposed over a thousand people, the community is very well vaccinated (100% of Kindergartners and 97% of 6th graders are fully immunized against measles), which likely helped stop measles in its tracks.

Also, it’s possible our known measles cases may have exposed other people several days after they first became sick, when they may have been less infectious, which would reduce the risk of spread.  Two of the cases had at least one measles vaccine in the past and may have been less contagious, which might also help explain the lack of cases among thousands of exposed individuals.  Finally, timely public health interventions helped to stop the spread.  Working together, our county health departments and the healthcare facilities that saw cases put in a tremendous amount of overtime and resources to identify, notify, and follow up hundreds of contacts, vaccinate many of them, limit exposures and monitor them for 21 days.

Even if we do come out of the weekend with no additional cases, the measles threat still exists.  The Disneyland-associated outbreak isn’t over in the US and measles is still endemic in other countries.  The best thing we can do to protect ourselves, our families, and our communities, is to get vaccinated.